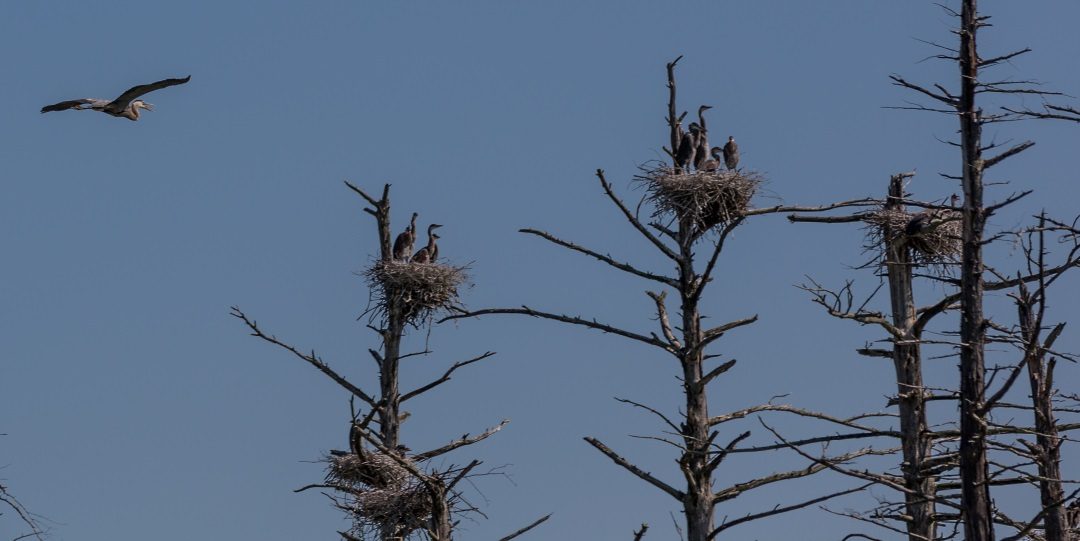 There is a little-known village perched high in dead white pines near where Boxford, North Andover, and Middleton meet.  Its noisy occupants, presently occupying over forty nests, gather spring and summer to raise a new generation of great blue herons high above water.  Middleton hikers call it the Pond Meadow Rookery.  What the yearly returning herons call it hasn’t been shared with us.  Herons from ice-free salt waters along the coast come each mid-March to add to old nests or make new ones and mate. 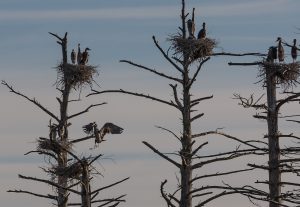 Parent, crop laden with food, is about to land. The hungry youngsters will be fed by regurgitation. – Pam Hartman photo

Three to six eggs are laid in each nest.  After 28 days incubating beneath parents the young hatch.  This has been happening at this rookery and others in the area more frequently since the beginning of the millennium.  Something happened in 1996 that led indirectly to many of our rookeries.  The Massachusetts Great and General Court passed a law banning leg hold traps.  The trappers stopped trapping.  The few beavers still here after a three-century hiatus since most were trapped out in Colonial times took over our wetlands again.  The results have been dramatic and fast.  In just one human generation over forty dams have been built in relatively small Middleton alone.  Our red maple swamps have turned into impoundments and “beaver meadows” above their dams.  The red maples, Atlantic white cedars, swamp white oaks, and white pines growing in the swamps and river flood plains are dead or dying.  These species like water but can’t take too much year ‘round.  In the tri-town area alone there may be close to a thousand acres of beaver-changed-territory flooded with sunlight now that the shade is gone.  These lively places are the richest of wild life habitats with several layers of life.  In the air above, the corpses of dead trees are inhabited by fungi, insects, and birds that eat bugs.  The water surfaces below the yearly-fewer tree trunks are partially covered with duckweed and lily pads. On the undersides of these aquatic plants are crustacea, protozoa, and dozens of other tiny creatures.  If experts cataloged those on and in the water the list would go on and on especially if microscopic organisms were included.  Descriptions, perhaps many, would note “species unknown.”   Below the water on and in the mud are bacteria and tiny worms living on the dead layers of slowly rotting trees that have fallen.  In this rich soup aquatic insects, crustacea, sunfish and frogs thrive.  Ducks and geese visit especially during migrations.  Wastes from the herons and other animals enrich the water.  In 2004 the first nests were seen high in the dead white pines on straight out branches, good platforms for stick nests.  With some fluctuations the number of nests in rookeries here has increased for a couple decades.  Each winter some pines succumb to winter storms and nests are lost.

Is it any wonder Middleton Stream Teamers and Middleton Council of Aging/Conservation Commission (COA/CC) Friday morning hikers like to visit and watch from dry upland knolls and hills they call “bleachers” on edges of impoundments?  In mid-June individuals and groups visited two of Middleton’s three rookeries several times. 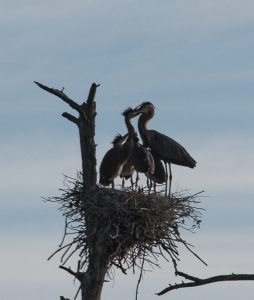 Parent feeding one of four young two-month old youngsters two-thirds as tall as it. This family of six, one parent out hunting, lives on one of 40 nests in dead pines high above the water at Pond Meadow Rookery, in Middleton. – Pam Hartman photo

Hatched in late April, early May, the hungry young herons grow fast.  Within two months from hatching they are over half the size of their parents who have been working overtime bringing in small animals (fish, frogs, snakes, mice, and even large insects) partially digested in their crops.  The two-foot tall young sense their coming with food and raise a ruckus.  The four-foot, seven-pound, parent lands on a nearby branch and then hops to the edge of the nest and pauses a bit before feeding.  The young crowd around the poised parent and peck at its bill.  Then, with their bills wide open, the parent’s great bill enters one after another at a seemingly dangerous speed as if stabbing the greedy recipients receiving the regurgitated food.  No wonder the offspring grow so fast; the rich protein meals are partially digested for them.  As in many families some kids get more food than others.  Perhaps the old saying “the squeaky wheel gets the grease” applies here.  In any event, whether fair or not, for human watchers these noisy domestic scenes are exciting.  Some young not as aggressive don’t thrive and are pushed out or fall from the crowded nests.  Without flight the unfortunates that fall to the water below are doomed; their parents can’t return them to the high nests.  In August the almost fully grown young learn to fly and then leave along with the adults.  The rookery falls silent.

Soon after a Friday COA/CC hike in mid-June to the rookery Judy Schneider and Pam Hartman crackerjack photographers asked the old Closeteer if he’d like to accompany them as they visited to take serious photos. *  He readily agreed since the rookery surrounded by thousands of acres of protected land is a favorite place he visits frequently in all seasons.  At 6AM the ladies set up their good cameras on tripods on a favorite high knoll near a dozen nests.  For the next two hours in beautifully clear air they patiently awaited opportunities for shots of the herons 200 to 400 feet away, 40 to 70 feet up, in nests built on bare branches.  They also tried with little success to capture swooping tree swallows that where picking off unseen insects in the air.  The Closeteer sat on moss below them next to fairly clear water populated with moving organisms.  He enjoyed listening to the ladies’ quiet chatter as they stood by their cameras talking about angles, light, shutter speed, etc. etc.  These photographers are old hands and photo contest prize winners.  Every few minutes he’d hear “incoming” as a parent flying low approached a nest.  They then clicked away at the youngsters feeding.  The resulting photographs are rather remarkable as are the great birds their subjects. 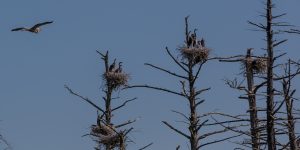 *  Pam Hartman has been traveling the world with camera for 50 years. Over the last two decades she has provided many photos to the Middleton Stream Team for its weekly blog,  The Water Closet. In the Team’s yearly photo and nationwide contests, she has won many awards.  Judy Schneider, vice president of the Middleton Stream Team, active member of the Ipswich River Watershed Association’s board of directors, and member of the Middleton Board of Health has become a wonderful photographer.  Weekly we receive her fine photos after hikes, paddles, and trips around the area and beyond.  The “Old Closeteer” is author of The Water Closet.  He is lazy about taking photos with all the talented and generous photographers around.