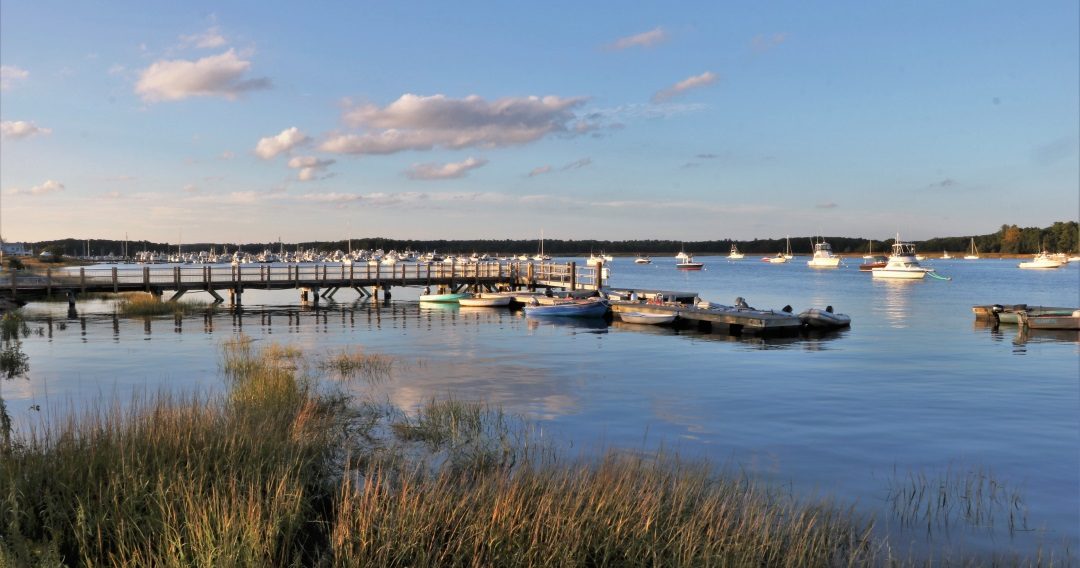 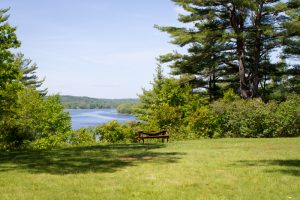 After flowing over a hundred miles down from New Hampshire and by the once industrial cities of northeastern Massachusetts the now relatively clean water of the Merrimack River passes West Newbury and Amesbury as seen from the heights of Maudsley State Park. – Judy Schneider photo

The mighty Merrimack River, our 117-mile-long neighbor to the north, receives water from over 5000 square miles of watershed in New Hampshire and Massachusetts.

The old Closeteer remembers a stinking sewer at times mid-last century as it flowed to the sea by his boyhood town of Salisbury.  Many kids in the lower Merrimack waited for the twice daily flood tides with clean seawater to swim.  Sometimes in summers, menhaden, a herring, would come in from the ocean in enormous numbers to soon suffocate in the bacteria and waste-laden warm waters.  Windrows of corpses would lie stinking along the river’s banks. 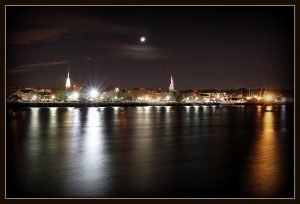 Newburyport, as seen from Rings Island, Salisbury, across the Merrimack River. This once famous working seaport now caters to tourists who come by cars and yachts. A century ago the river was a sewer for Newburyport and upriver cities. In the latter part of last century septic systems were built by communities along the river. – Elaine Gauthier photo

Floating on the current from upriver cities’ mills would be scraps of leather, gobs of grease and other industrial debris. Boys searched the wrack lines for treasure.

In 1972 the Federal Clean Water Act resulted in money and subsequent actions to resurrect the Merrimack and hundreds of other rivers.  Now when the Closeteer rows dories on it with friends, he finds it clean.  However, it isn’t always so, and is still having problems as the following briefing by the Merrimack River Watershed Council (MRWC) shows.  Some of the sewer systems will not all handle large discharges during rain storms.  The MRWC has given the Middleton Stream Team (MST) permission to use this information. – MST 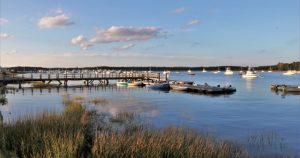 Plastic pleasure boats have replaced the great wooden sailing ships, forerunners of the clippers, built here at the site of the famous Currier shipyard in Newburyport. Newburyport yards built over 3000 ships in the 17th, 18th and 19 centuries. Their ships sailed ‘round the world. – Elaine Gauthier photo

– Six urban sewage treatment systems in the Merrimack River watershed frequently discharge large quantities of raw sewage during rainstorms: Manchester and Nashua, N.H., Lowell, the Greater Lawrence Sanitary District, and Haverhill (all on the Merrimack River), and Fitchburg (on the Nashua River, a Merrimack tributary).

– These sewage systems overflow because they were built years ago to bring together sewage from toilets and sinks (so-called “sanitary sewage,” essentially infectious and toxic human and animal waste) and stormwater runoff.  Treatment plants cannot cope with the combined volume of raw sewage and polluted stormwater during heavy or protracted rain events, so they discharge the excess directly into the river.  This is called a “combined sewer overflow,” or CSO.

– CSOs are frequent and significant.  In 2017, these six sewage treatment systems experienced hundreds of overflow events, discharging an aggregate of more than 300 million gallons of raw sewage into the river.

– Nearly all of this sewage was discharged upstream of drinking water plants that provide Merrimack River water to residents in five municipalities: Lowell, Lawrence, Methuen, Andover, and Tewksbury. (A sixth, Nashua, receives some of its drinking water from the river.)

– All told, some 600,000 people get their daily drinking water from the Merrimack River. Within a decade, that number is likely to increase by up to one-third, as Manchester and Haverhill tap into the river to expand local supplies and sell water to other communities.

– The Merrimack River is the second-largest surface-based drinking water source in New England. The largest is the Quabbin Reservoir, which, unlike the Merrimack, was built to provide pristine drinking water to Eastern Massachusetts.

– Right now, public notice of CSO events is woefully lacking.  Most sewage treatment plants notify only a small group of officials, in many cases providing highly incomplete information that is released often only well after the fact.  The largest polluter on the river, the Manchester, N.H. treatment plant, is required to report its wet-weather CSO events only once a year.  Moreover, many systems estimate the level of a given CSO discharge only very crudely.  As a result, we really can’t assess the full extent to which raw sewage is affecting our river and its many users.  Users include swimmers, competitive and recreational rowers, paddlers, anglers, boating clubs, high school rowing teams, waders, jet skiers, water skiers, paddle boarders, and even household pets.

– Exposure to raw sewage can cause multiple, serious health problems, particularly for the very young, the elderly, and those with compromised physiology. According to [THE] EPA, raw sewage includes many disease-causing agents in three general categories:

— _Bacteria: _ single-celled organisms that, when pathogenic, can cause cholera, dysentery, shigellosis, and typhoid fever;

— _Viruses: _ parasites that grow on living tissue and, when associated with feces, include hepatitis A, Norwalk-type virus, rotavirus, and adenovirus; and

— _Protozoans_: about a third of all protozoans are pathogenic, and these can cause gastrointestinal disease, dysentery, and ulceration of the liver and intestines.

– Sewage can remain in the Merrimack for up to three days after a CSO event — a period during which, in many cases (especially in the nice weather), the skies have cleared and the river environment can seem deceptively inviting to fishers, boaters, and swimmers.

– A 2015 peer-reviewed health study found that, in the Lawrence area along the lower Merrimack, a statistically significant association exists between heavy rains (which trigger CSO events) and an increase in hospital emergency room admissions of patients complaining of gastro-intestinal disorders.

– These sewage treatment plants are under government order to eliminate most of their CSOs, but it will take 10 to 25years to get there (and even then, some raw sewage releases are likely to be permitted). Meanwhile, CSOs will continue to be a regular feature of life on the Merrimack.

– Several states and other jurisdictions have adopted programs that provide the public with real-time notice of CSO events.  Massachusetts is now considering legislation; New Hampshire has not yet done so.  At minimum, sewage plant operators should tell residents that a sewage overflow is happening when it is happening.

– CSO operators also should upgrade their systems as soon as possible—and in any event no later than the schedule called for in their individual remediation orders.

– The federal government and the states should provide realistic funding for CSO elimination — in much the same way that the Clean Water Act amendments of 1972 helped local communities construct their treatment plants.