DUCKS AFTER ICE OUT ON OUR PONDS


“Their fluffing, twitching feathers catch the light and transmit it back in glowing shades of rich browns, grays and cinnamons.”

Folks often visit Prichards Pond; a third mile long bulge in Boston Brook filled with runoff down from the distant heights of Boston and Holt hills in North Andover. The water lingers awhile behind a century-old dam before moving on to the Ipswich River. This March, the water clear and cold, much recently snow, tumbles over 500 feet of rocky bottom just before entering the pond. Before it reached this riffle of stone to stone aerating splashes it had flowed more slowly through five miles of filtering beaver meadows. Nine miles of forests flanking the Boston Brook floodplain are relatively free of human development. Up until the new millennium the brook’s floodplains were shady red maple swamps. Beaver dams drowned the maples and turned the swamps into sun-lit beaver meadows. A century or so ago these were farmers’ meadows with a railroad running through. Stream Teamers often walk the now rail-less bed with brook water flowing down both sides. It is a favorite year round hiking and skiing trail from which to see wildlife and flowers. 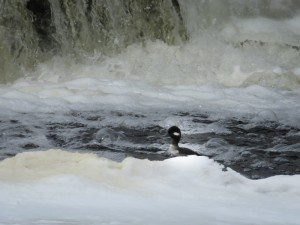 There are no flowers now but buds are swelling on sunny days. Let’s return with the flow, some in quiet beaver impoundments now covered with ice, to Prichards Pond a place in spring and fall to see migrating ducks. Last week it too was still sealed in ice. By the end of March much should be open. The clear dark water and graying ice will contrast nicely. It is on such liquid stages that courting hooded mergansers, Lophodytes cucullatus, and buffleheads, Bucophala albeola, perform.1 They are already playing on several ice free acres of Middleton Pond.

From a distance we often mistake the males of these two species because of their expanding and contracting “buffles” and “crests”, patches of white feathers on the tops of their heads. Both species are handsome small diving ducks. The mergansers, both male and female, are sights to behold in sunlight. Their fluffing, twitching feathers catch the light and transmit it back in glowing shades of rich browns, grays and cinnamons. These colors and their whites and blacks change with each movement. Paintings and photos in bird books don’t come close to doing them justice. Mingling buffleheads, usually outnumbering but seemingly friendly to the mergansers, while slightly larger and less kaleidoscopic in their displays, are also impressive. The male buffleheads have bright white sides as well as the expanding buffles. Both are small and quick in all their movements. They sometimes submerge in unison, their departure unseen. A couple springs ago we watched five, which were suddenly not there anymore. They didn’t stay down long, soon arising nearby. When spooked, they arose instantly and flew for a moment right towards their startled admirers. Within less than 80 feet flying low, they swerved hard left and flew down pond beyond spook range. We stood still for awhile; later they returned at high speed, wings beating rapidly.

Let’s digress from recent years’ sightings and visit Edward Howe Forbush writing of hooded mergansers here a century ago. This great Massachusetts birder, who left us three marvelous tomes2 on our birds, obviously had a Victorian education and was, fortunately for us, not shy about colorful anecdotes and what some might call too fancy prose. We in the Closet like it. Here is how peeping Edward, “lying prone amid grasses and underbrush . . .” described hooded mergansers this time of year.
“The cold and privation of the winter have passed, and now in the solitude of small secluded pools, streams and ponds in swamp and forest the Hooded Mergansers disport themselves. Returning spring with its annual awakening kindles anew in their breasts the glowing fires of reproduction. The males in all the splendor of their elegant spring plumage seek and pay court to their prospective mates. Gallantly they dash back and forth, rippling the dark waters, expanding and contracting their flashing fan-shaped chests, now proudly rising erect on the water with bill pointed downward and head drawn back, now speeding in rapid rushes to and fro. The ardent males chase the females, pursuing them on the surface and even following them under water.”3
When we return to the ponds we’ll check to see whether there are “ardent” females chasing males. Forbush couldn’t comfortably say so in his time. 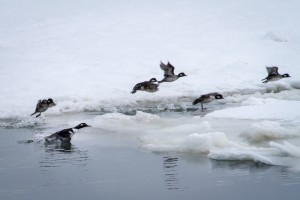 We in the 21st century can so wonder out loud, which leads us to a Massachusetts Audubon Society publication the Breeding Bird Atlas (BBA). The first, BBA 1, about courting, breeding, nesting and fledging covered data gathered around the state from 1975 to 1979, and a second BBA 2 from 2007 to 2013.4 The latter’s preliminary report says hooded mergansers, tree cavity nesters, are “rising stars”. Thanks to beaver drowned forests in the past two beaver decades and to human built wood duck nest boxes there are now more cavities. Ipswich ornithologist and friend of the Water Closet, Jim Berry, one of many BBA researchers and authors, reports that female hooded mergansers lay eggs in occupied wood duck, Aix sponsa, nest cavities. Let’s for the fun of it be breezily anthropomorphic as was Forbush. Mrs. Woody, surprised recipient of Mrs. Hoody’s eggs, then incubates both hers and the “dumped” eggs. One male, we’ll call Hoodie, exits his egg shell after incubation and imprints on Mr. and Mrs. Woody and his legitimate nest mates. Nature vs. nurture questions now arise to a new level. Is Hoodie now a wood duck? Will Hoodie’s merganser DNA or his imprinted family’s behavior and surroundings now take the upper wing? Will Hoodie become a cultural hybrid? How do nest siblings and parents treat him? On reaching sexual maturity will girl mergansers and girl wood ducks positively respond to any “ardent” advances from Hoodie? Will female wood ducks perceive something strange about him or will they be attracted to his exotic charms? Will Hoodie court girls of both species? It looks like his lazy mother may have done her abandoned son no favors? Do female wood ducks reciprocate by leaving eggs in mergansers’ nests? We who ponder thusly have some concerns about poor Hoodie’s mental health. Who is Hoodie? We wonder if he doesn’t often ask “who am I?”   For anti-anthropomorphists, you might change the verb ask in the last sentence to feel.
1 Buffleheads from the coast are now heading northwest to nesting areas above the Great Lakes. Almost any of our ponds provide stop offs. We are not sure where the hooded mergansers are going. Some will nest here.
2 Forbush, Edward Howe. Birds of Massachusetts and other New England States (Massachusetts, Department of Agriculture Norwood Press, 1925)
3 Ibid. Vol. I, page 188
4 Google Breeding Bird Atlas, Massachusetts Audubon Society and look for birds you are interested in.
_____________________________________________________________________________

WATER RESOURCE AND CONSERVATION INFORMATION
FOR MIDDLETON, BOXFORD AND TOPSFIELD`