LANDINGS ALONG THE RIVER

The following article is an updated version of Pike Messenger’s original celebrated article: “Landing Along the River”.

Along the roads of life there must be places where we stop to smell the water lilies and listen to the comforting flow of water.  Many of us will go some distance to see water.  Why not areas along our river to provide breaks for passers-by on their daily chores?  In Native American and early Colonial times here, streams and rivers were the highways.  Shouldn’t we maintain connections between today’s asphalt network and the water one of yore?  Even cities of stone and pavement have parks by ponds and rivers.  Frederick Law Olmstead’s Emerald Necklace along the Charles River in Boston is a famous example.

In 1998 the Middleton Stream Team was formed under the auspices of the Massachusetts Riverways Program with encouragement and help from the Ipswich River Watershed Association.  In Middleton, our mother river, the Ipswich, receives water from brooks named Flint, Punchards, Middleton, Emerson, Boston and Nichols as encountered, in turn, on a paddle down river from North Reading and Lynnfield to the Topsfield line near I-95.  Smaller unnamed brooks feed these tributaries.  The team’s initial goal was to watch over the health of these waterways and their wetlands.

Members of the team soon became interested in public access to the river at various road crossings in town.  At each intersection there were shabby, small parking areas that attracted trash.  In 2002 the team learned through the Conservation Commission that an acre lot on the river at South Main Street (Route 114) across from Danvers was town land that had been taken by tax title. The long-neglected place, once a stone yard, was covered with discarded stone fragments, bushes, briars, and patches of asphalt surrounded by a rusting cyclone fence.  The stone business was gone; its debris was not.  The team asked the town if the team could clean up the lot and make a park.  The town fathers said O.K. and volunteers with the blessing of the Conservation Commission went to work.  Within three years it had become the lovely park you see today named Farnsworth Landing1 after the late river champion and longtime conservation commissioner, Raymond A. Farnsworth.  Of the team’s now five riverside parks, this, the first, is considered our cardinal flower where many people off the busy highway stop each day to take a break.  There are two picnic tables and a fine large flat rock as well as stone steps to dine on.  The debris has been replaced by lawn, trimmed trees, flowers beds, and a crushed stone parking area.  When the land was taken over, there were rotting wooden steps leading to the river, once a crude access for paddlers.  We asked Middleton contractor Vito Mortalo about a proper landing.  He from Italy, an American for 45 years and a stone lover, pooh-poohed short lived stairways and built us a beauty of stone steps at very little cost to the town.  He submitted no bill. The town insisted he take some money.  Thousands have used the Farnsworth park-landing since it was named and formally dedicated to the town in 2005.  Middleton’s Department of Public Works (DPW) and Stream Teamers maintain it with some cleanup help from users. 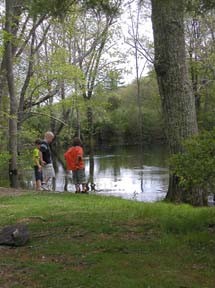 Peabody Street Landing – It is spring, perhaps the boys are daring each other to go for an early swim. Photo by Judy Schneider

After checking the “kiosk,” a cedar-roofed and cedar post-supported display board, with a river map and nature trail information at Farnsworth’s, and after visiting a commemorative stone with a bronze plaque given by the Farnsworth family, we paddlers get underway for the team’s next landing one-half miles downriver off Log Bridge Road.  In 2007 Xavier Chambers, an aspiring Eagle Scout of Middleton’s Troop 19, under Steam Team sponsorship, took on the project of turning a roadside dump there into a park-landing.  From early colonial times right up until 1972 a bridge, once made of logs, crossed the river from then “Salem Village” to “Salem Farms” Salem Village later became Danvers and in 1728 Salem Farms became Middleton.  In the 17th and 18th centuries it was a key point along the main cart path from Salem to Andover.  Most transport between those colonial towns was by sea around Cape Ann and up the Merrimack River.  Chambers, other Troop 19 scouts, and volunteer Middleton contractor Timothy Willey with his men and heavy machinery did a fine job on what is called Log Bridge Landing.  Several other contractors and friends also helped.  Chambers coordinated all the volunteers’ activity and became a deserving Eagle Scout.  This landing and mini-park with picnic table and kiosk with map and other information is a quiet place to escape the bustle of commerce.  A bronze plaque on stone tells the history of the onetime bridge.  The land between the road and riverbank above the old bridge abutment is no longer used as a dump.  Often on our rounds we’ve seen people resting there, watching water and wildlife. One Stream Team photographer visits many Sunday mornings each year and sits on a bench.  She calls the landing her church and the bench her pew.   Although all the land is in Middleton, half is owned by Danvers, the other by the state. 2 For the last decade or more beavers have maintained a dam that they built across where the bridge once was.

A fine three-acre stand of mature hardwoods and pine called “Window on Wetlands” begins just a 300-ft. walk up Birch Street along the river from Log Bridge Landing.  In 2008, the Stream Team sponsored another Eagle Scout project by David Florance of Troop 19 to develop this into a nature park.  This woodland now has a 600-foot loop nature trail just above the river’s wetlands.  This park without river access is also on state land. 2      Visit and walk this trail in the shade just above the floodplain.  You’ll pass under two impressive red oaks.  During major floods nearly the whole area is under water. The record flood of “Mothers’ Day” 2006 covered portions of all landings along the river from Wilmington to Ipswich. 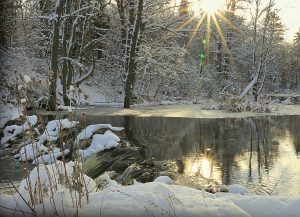 After returning to Log Bridge landing, we descend granite steps to our canoes and kayaks waiting to continue with the seaward flow.  The next two great meanders flanked by dead ash and swamp white oaks appear grim to some.  Large beaver dams down river have drowned acres of trees.  Many trunks, gray corpses, still stand.  The light now pours in making such impoundments rich wildlife habitat.  Muskrat lodges are seen among fallen trees.  An hour or two later, depending on conditions, after having passed Richardson Farm fields, we paddle under the Maple Street (Route 62) bridge into a cove below Mortalo Landing, yet another Stream Team mini-park.  Vito Mortalo artistically placed magnificent stone steps from the water up to it.  Some of the carefully selected natural stones are 3 by 6 feet.  At their top is a small parking area and lawn ringed in back by an oak-locust rail fence.  In 2006 the state2, which owns the lot, approved the Stream Team’s request to clean up this wooded dump where long ago there had been a small house.  In 2011 the project was finished.  The Selectmen upon recommendation of the Stream Team named it Mortalo Landing in honor of stone artist Vito.  Landscaper, stream teamer Glenn Bambury voluntarily has done wonders maintaining this and other Stream Team riverside parks in the past few years with the help of fellow Stream Teamers and the Middleton DPW.

Before leaving Mortalo Landing, we visit one of Topsfield Boy Scout Peter Sacco’s fine kiosks with educational displays. Under Stream Team sponsorship he and other scout volunteers built and installed six such kiosks at various landings along the river from Middleton to Hamilton.  Stream Team president John Bacon served as Peter’s mentor for this impressive Eagle Scout project.  After admiring Peter and Masconomet art students fine displays we descend Vito’s beautiful steps and are underway again.3

After a lovely mile of meanders flanked by wooded uplands, we come upon a pleasant clearing called Rachel’s Rest in memory of the late Rachel Carson of worldwide environmental fame.  This generally flat area where once a summer cottage stood was made into a place for the paddling public late last century, and then neglected.  A decade ago, the Stream Team took it over; cleared it again and planted a buffer of white pines on the north side.  Wildflowers and those from the long-ago owners’ garden now thrive.  A sign reminding folks of the late Carson and inviting paddlers to stop and rest awhile is on the river’s edge.  Rachel’s Rest is on town conservation land and a parcel to the west abutting Mill Street owned by the state.  The clearing has no street access other than a narrow, little known, woodland path to Mill Street.  This shady rest and picnic spot are for paddlers off the water.

From Rachel’s Rest, in less than a very pleasant mile, our tiny fleet rounds a bend beneath Greenbelt’s mowed and cultivated fields off Peabody Street.  These fields, river bottom land, may have been cultivated continuously for last several millennia by Native Americans and the Colonial and American farmers.  Richardson Farm alternates corn and cover-crops on them now. Last century, before Richardson, Arthur and Ernest Curtis farmed the land.  The brothers and helpers found hundreds of native artifacts which were turned over to museums.    Before us is another Mortalo creation of handsome stones beautifully positioned on the river’s edge of our Peabody Street landing project. 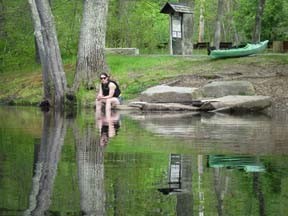 Peabody Street Landing – Rachel Schneider, friend of the Ipswich River, sits on one of Vito’s stones. Do her thoughts join the flow down to the sea? Note Stream Team’s informational kiosk in the background. Photo by Judy Schneider

The great stones in and just above the water are perfect platforms for play and relaxation.  In 2002 the team was awarded a small grant from the Massachusetts Department of Fisheries and Wildlife to help with the project. It wasn’t needed, again all the work was done by volunteers.  This landing is on state land. 2   Its small parking area and lawn, which replaced a muddy puddle, was finished in 2004.  The park has an informational kiosk with map and photos, and a picnic table.  In summer we prefer to sit on Vito’s great stones, feet dangling in the water.  No time now, let’s continue a half mile further down river to Thunder Bridge. 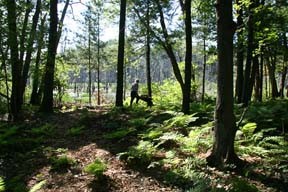 The trucked in sand beach below Thunder Bridge, East Street, is the town’s public swimming hole.  It too is a good place to put in and take-out kayaks and canoes. There is plenty of parking except on hot summer days.  Another of Peter’s handsome kiosks graces the back lawn.  Masco student artists helped him with the fine educational displays of all his kiosks.3   We could continue on to Topsfield, another half mile or so, or on to the sea about 17 miles further.  We’ll take out here and leave that for another day or two.

In our roughly eight-mile paddle down from Middleton’s southwest boundary, where there is not yet a proper landing, we stopped at five that were barely usable or even known a decade and one-half ago.  These attractive parks made by and provided for by diverse volunteers with DPW’s help at virtually no cost to the town are open to all.  When on our periodic checks, we’ve seen citizens napping, eating, drinking, smoking, chatting, phoning, kissing, reading, fishing, stretching legs, exercising dogs, playing with children, putting in and taking out kayaks and canoes, or just sitting, seemingly doing nothing but watching the water flow by.  Our favorite times at the landings are during spring and fall cleanups when with wheel barrows, saws, rakes, and shovels we happily work together as a “team” without a thought as to who is winning.