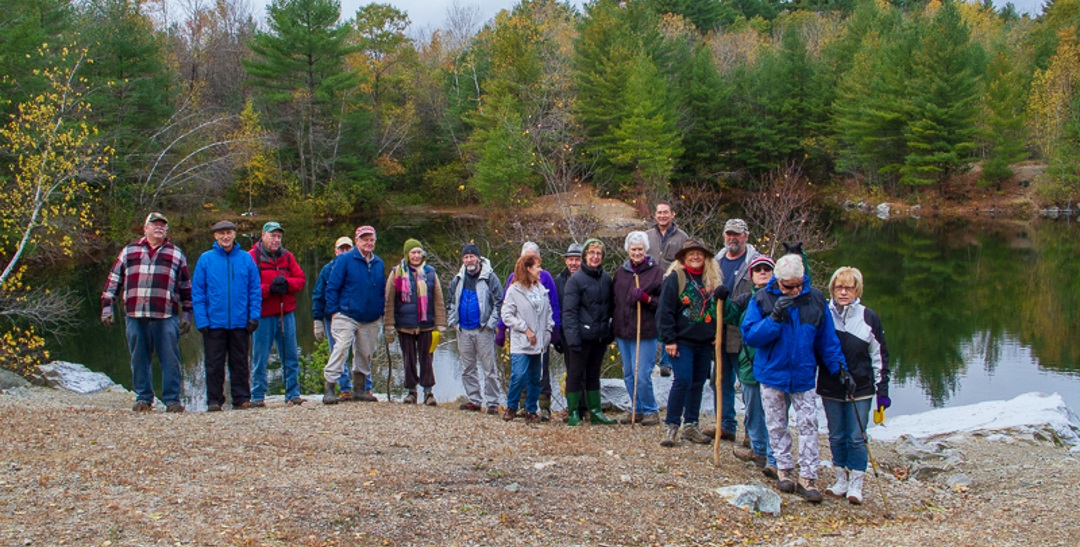 On Sunday, October 28, a score or so of adults ventured on woodland trails in the very northern part of Middleton and the southeastern wilds of North Andover near southern Boxford. The first mile from Sharpners Pond Road on soilless ground where the planned Anti-Ballistic Missile site was started in the late 1960s. Folks protested, President Nixon cancelled the project in the early 1970s.  Since then birches, oaks, and pines thirty feet tall have grown up from the gravel. The hikers stopped to admire a deep pond blasted in diorite where the radar’s power plant was to have been. When the project was abandoned it became a popular swimming hole that has taken a half dozen lives.   The wide well-built road leading to the site from Route 114 was a place once without houses and traffic where many area teenagers learned to drive.

At the start of the three-mile loop we met a Polish man who had been foraging for mushroom.  This wet summer and fall have given us lots of mushrooms.   The man had a 5-gallon bucket chuck full along with a large plastic bag also stuffed with the same variety.  We forgot the Polish name for the species he gave us.  He warned us to be careful when picking and eating wild mushrooms as some will make you very sick. He said he washes down the species collected with vodka.

It had rained quite heavily on Saturday and extended into Sunday morning the day of the hike and the ground was wet in spots. The hikers walked along a portion of the Bay Circuit Trail, Boxford Trails Association trails, and Middleton hiking trails on protected Massachusetts State and Essex County Greenbelt open space-conservation lands. As they hiked, they looked for objects that did not belong planted there by Middleton Stream Team President Sandy Rubchinuk and husband Leon.  These were set out for kids to find, alas unlike most Stream Team hikes there were no kids just childlike old timers.  “Oh!  There’s a pumpkin sitting on a pile of brush alongside the trail.”  Hiking a little further along, a rubber ducky was spotted peeking out of a hole in a tree.  Another rubber duck wearing a bikini was spotted in another hole further along on the trail.  One of the hikers found two Geocashes on the trail.  Other hikers spotted a flying monkey in a tree.  A plastic owl was also spotted along with a witch sitting in a pot. Because Halloween would occur in a few days, these odd observations were just for fun and always brought a few laughs and comments. The group was mainly out there to study the natural and social history of the area once pasture, now forest.

We are fortunate in our evermore populous towns to have very large areas of protected, varied wildlife habitats nearby to enjoy.   These habitats include upland hardwoods on thin soils on ancient granite, vernal pools, brooks, glacial till, huge stones called erratic brought in by continental glacier ice, drumlins, wetlands, kettle ponds, and now vast beaver impoundments.  You can walk for miles in the Boxford State Forest area where North Andover, Boxford and Middleton meet and its bound’s surrounds without seeing houses or asphalt.  Much of these rough up-and-down areas were poor pastures just a century ago.  The trees have taken over.

Come join us on our winter hike Saturday, January 26.  Send us your email address (click here)so we can remind you.  Bring children


Warning: count(): Parameter must be an array or an object that implements Countable in /home/middle45/public_html/wp-content/plugins/slickquiz/php/slickquiz-front.php on line 59