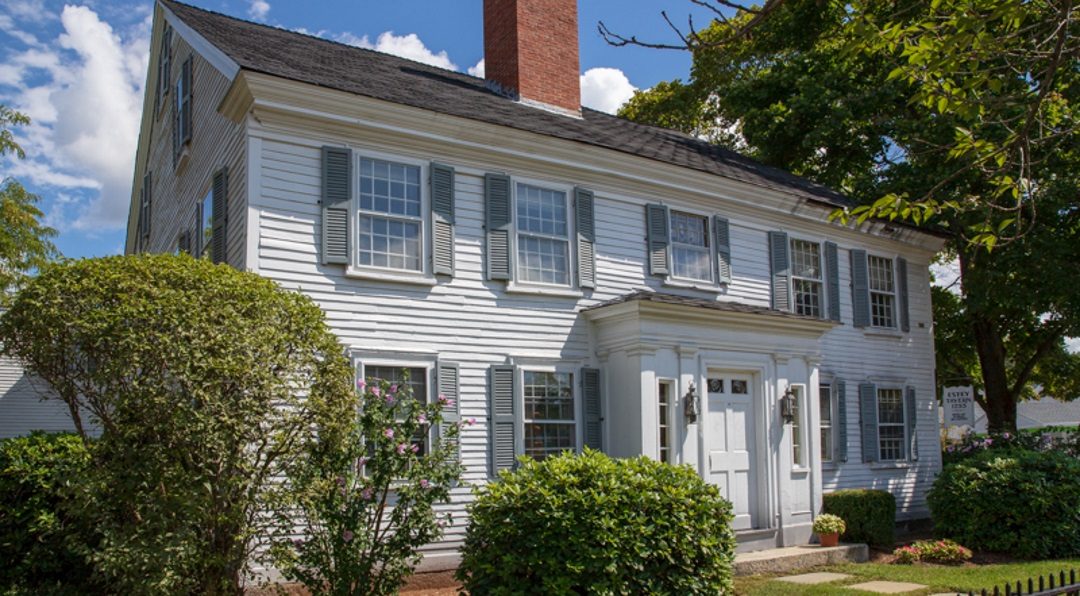 Paul Richardson, owner of venerable Estey Tavern[1] in Middleton square, was surprised by a mid-morning request for a tour of his handsome building on a recent Friday.  He left a busy looking desk in his office across the street and joined the Middleton Friday morning Conservation Commission/Council on Aging hikers just outside and cheerfully led them to a once tavern built in 1753.  It was beautifully renovated by his family in the early 1990s.  18th and 19th century drovers seeking rest used to stay in a large room on the 3rd floor. Travelers of more means slept in rooms on the first and second floors.  Horses, oxen, and other livestock grazed and slept in the inn owners’ surrounding pasture.  They got water from streams nearby.  Richardson’s audience on the unplanned tour were soon chuckling at his quick wit as they went floor to floor and visited offices that had replaced apartments after renovation.  Old, time-blackened, original beams and rafters with adze marks were admired.  These timbers and original boards greatly added to the finished, attractive offices where once travelers had bedded down.  Lafayette was said to have stopped by.  Richardson kiddingly also floated Washington’s name as no doubt the innkeepers once had.  One old wiseacre cracked, “He really slept around.”  Our knowledgeable tour guide generously gave us twenty minutes out of his busy day as he took us back to a time long before Cumberland Farms dominated the square.  We had real farms then. 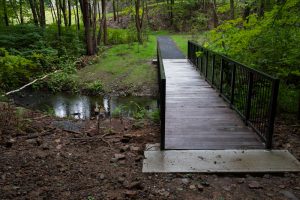 Foot bridge over Middleton Brook where it passes near Middleton Center behind Cumberland Farms was recently built along with path to become an access to and part of the Henry Tragert Town Common. – Judy Schneider photo

From the inn, guests of yore in the morning would have continued on north via Essex Street, easterly to Salem harbor, south towards Boston on Boston Street, or northwest to Andover by Essex or Forest streets.  Middleton was an appropriately named hub in those days as it is now without an inn but evermore traffic moving quickly without cattle, hogs, or sheep.  State routes 114 and 62 cross here.  Handsome Estey Tavern and Flint Library save the center from being only a place of gas pumps and convenience stores.  Cumberland Farms and the Conservation Commissioners to their credit have added to the Henry Tragert Town Common with improvements in the store/gas station’s back yard, on “riverfront land” of Middleton Brook.  They’ve built an access path and a bridge across the brook to the commons.  Friday hikers after leaving Estey’s walked on the path and over the bridge for the first time.  Cumberland’s huge second floor/attic has no beds for passersby.  Trips from Salem to Andover now take less than 40 minutes.  Back in Estey Tavern’s time they took over half a day, for the drovers and their livestock maybe one or more.  The cart paths with mud seasons and even rolled-snow in winter were a challenge for horses, oxen, and hardy teamsters who needed a rest when they got to Middleton.  Many days of the year cart paths were nearly impassable.  Much of the heavy transport between Andover and Newburyport on the Merrimack River and Salem was done by ship around Cape Ann.

Middleton was also connected to the sea by the Ipswich River.  A tributary, Middleton Brook, passes right by Estey Tavern.  Dr. Silas Meriam and others before him had a water powered grist in the 18th and early 19th century near where Cumberland Farms and Estey’s are now.  Just a third mile down the brook a century earlier was Timothy Fuller’s sawmill, powered by a mill pond that extended up the brook to below Estey’s.[2]  Before the manmade dams the Indians paddled and fished the tributaries and river back up to what is now Wilmington.  Beaver dams kept streams and small rivers navigable by keeping water in the watersheds higher year around as they do again now.  Middleton in the center of the Ipswich River watershed and between the important colonial towns of Andover and Salem was truly a center then, a way station for travelers.  By 1728 Middleton had become independent of Salem. 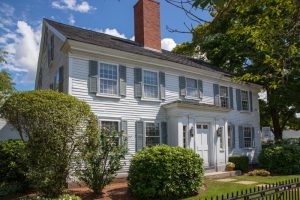 Estey Tavern in Middleton center was built as a wayside inn in 1753 and served as such for a century. It, renovated by the Richardson family in the 1990s, is on the National Historical Register. – Judy Schneider photo

Those of you who have followed the Water Closet since it was first published by the Middleton Stream Team in 2005 are probably tired of reading about the great dam builders, beavers, trapped out by the Indians for the English fur traders.  The beavers returned in the late 1990s after steel-leghold traps were banned in Massachusetts.  Judy Schneider, vice president of the Stream Team and member of the board of directors of the Ipswich River Watershed Association, recently forwarded a report from England about beavers who escaped captivity there and multiplied. These newcomers are conserving the water and protecting land in a watershed there.  They are true environmental champions as we have so often touted here.  The beavers never needed the likes of Estey’s; they build their own lodges along our waterways.  They generously allow muskrats and other small mammals to board with them.  As we so often seem to do we’ve strayed from our main topic, the hike and tour of Estey’s.  However, our larger purpose is to show how roads have overlain a little-known network of foot paths and streams that were important to Indians, early Colonists and wildlife.  Estey’s was an important place on cart paths that preceded the rail and street car lines and paved roads.  Paul Richardson and family nicely preserved it in ways we can all take pride in.

Someone who has lived in town for some time asked a friend of the Stream Team recently about where folks could launch canoes and kayaks into the Ipswich River.  Surprised by the question, the town’s four landings built by the Stream Teamers and volunteers on the river were pointed out.  People know about our paved roads but not the ancient water paths, now labeled by roadside signs in Middleton, that are protected by the Rivers Protection Act.[3] They’ve become lovely natural gardens and rich wildlife habitats throughout the year, especially now that the water is kept deeper again by beavers.  Their lower, leaky dams overridden by spring high water don’t block anadromous fish.  Maybe once the concrete dams across the river are gone the fish will return  and pass under our roads and by Estey Tavern.

** Middleton Stream Team is the source of actual precipitation data for August.