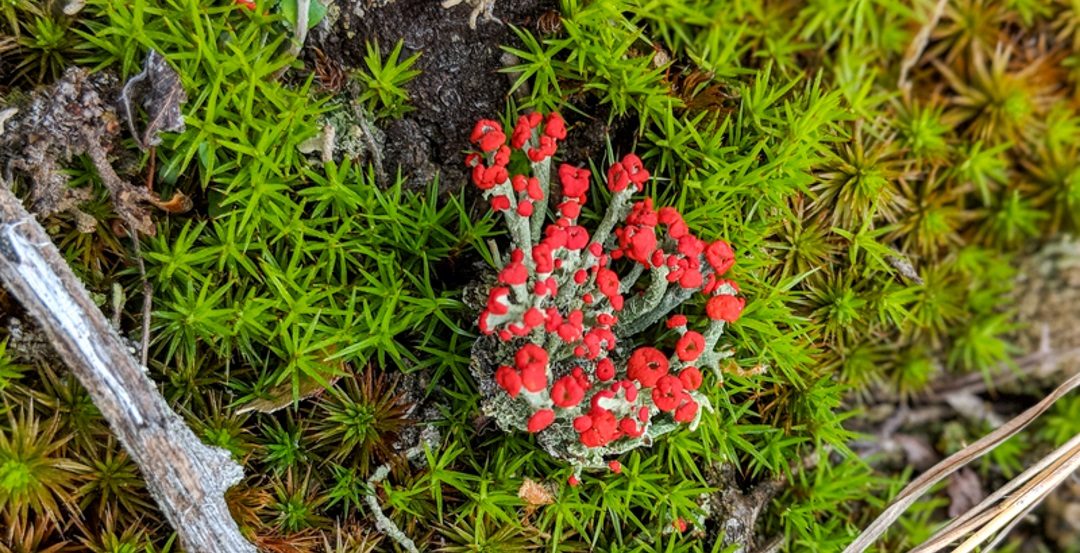 Tree buds put forth blossoms and leaves of many colors in late April and early May each year.  It is happening now.  On a recent overcast day light rain fell sporadically as the old Closeteer and artist friend Nancy visited Boxford Trails Association/Boxford Land Trust (BTA/BOLT), protected land abutting Richard King’s tree and shrub nursery in West Boxford.  Cloud-subdued light fell on his nursery plants and oak woods around his place.  The visitors exited off Ipswich Road (Route 133) on to a narrow unpaved driveway across an open swamp of wetland bushes and herbaceous plants draining to Sperry’s Pond, headwaters of the Parker River.  A homemade sign asked drivers to watch out for turtles.  They continued at a walking pace on the causeway and then entered an interesting yard of potted plants awaiting customers.  Many plants have grown down through their pots.  Eighty-seven-year-old King was near a shed talking with a middle-aged couple, who, the newcomers soon learned, rescue and protect turtles.  Nancy and the Closeteer were warmly greeted by Richard and the turtle champions.  After chatting with them they stepped over an ancient stone wall onto the once rough pasture now woods of Potter’s Farm connected recently to Nasson land; Potter’s and Nasson’s tracts protect 116 acres of open space-conservation land.

Nancy and the Closeteer entered on one of many miles of BTA trails in Boxford into a mature oak forest.  In warm spring air, clear but pleasantly humid, they hiked woods now owned and protected by BTA/BOLT.  Sprinkles had stopped but all was still wet.  The rocks, duff, tree trunks, bushes, and, especially new leaves, were shining along the path.  Crowns of oaks, hickories, hornbeam, and yellow birches above were just leafing out and blooming thus adding another magical filter of light to that of the clouds. 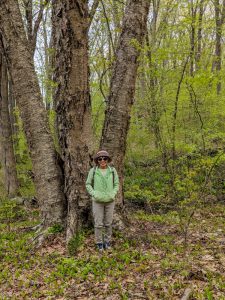 The new leaves unfurling on understory trees, birches, witch hazel, young oaks and blue berries were glowing with the freshest of colors.  The walkers compared what they were seeing to Seurat’s pointillist paintings.  While Seurat couldn’t do justice to what they were seeing and feeling; he’d somehow caught some of the mood.  Mosses, lichens, and new ferns, many still rolled up fiddleheads freshly wet, struck the viewers’ eyes with their vivid and varied colors.  Some of the mosses between ledge and last year’s leaves seemed incandescent.  The pair stopped every few yards to point out some marvel.  Unspoiled woods and inconspicuous earthen paths drew them on.  They’d been here at other seasons but the newness and promise in the moist spring air excited.

The meandering trail soon took them by a 300-foot long beaver dam holding back a large pond, once a red maple swamp that has been built increasing higher in the last twenty or so years.  Drowned maples have mostly fallen and are rotting slowly on the bottom in the impoundment’s slowly thickening mud.  Water along the edges of the eight-acre pond are now decorated with floating emerald-green duckweed whose parents had slept on the pond floor all winter and risen to the surface to reproduce.  Billions of new offspring also seemed to gleam.  The walkers knew that all the green tissues in duckweed to the highest oak leaves were also giving off oxygen.  Perhaps this too lifted their spirits.

After a pleasant hour, and less than a mile, they came to an open strip devoid of tall trees that was created by people for high voltage transmission lines.  This 200-foot wide strip many miles long, undeterred by topography, beelines over ledge and swamp and without shade lets light pour in.  Hikers are suddenly among diversity which delights and amazes. 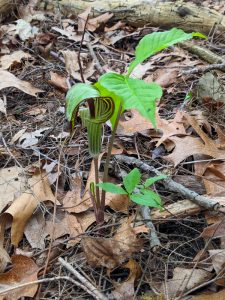 Potter’s Farm woods. “Jack in the Pulpit” just unfurled and about to preach. – Judy Schneider photo

These broad strips of land left alone except for periodic visits to keep what will grow to tall powerline-touching trees down must be for some botanists’ heavens.

Wildlife, who need edges, habitats where woods border shrubs and herbs, like them too.  In a just few minutes while climbing a high ledge with rock exposed in many places the walkers found a dozen plants, mosses, and lichens they could somewhat confidently name and two score that they couldn’t.  Blueberries, low and high; bear berries; huckleberries; a dozen lichens, including British soldier and rain deer moss; several brambles, such as raspberries and black berries; and many seedling trees, oaks hickories, sassafras, the list recorded by a botanist would go on and on. 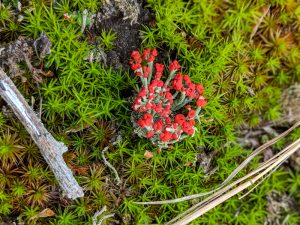 “British Soldier” lichen surrounded by moss. This lichen, others, and many sun loving plants were admired under high-tension wires recently in Boxford by Middleton COA/CC hikers. – Judy Schneider photo

The visitors, now enchanted observers, often asked, what is that?  Artist Nancy, a sculptor, felt the many organisms and marveled at their texture and colors.  The rain deer moss when dry feels like crumbly shredded wheat.  When wet and warm it slowly grows and feels like the softest of sponges.

The sight that most delighted were the low bush blue berries in full bloom.  The walkers ate clusters of their bell shaped white flowers enjoying the tart flavor quite unlike the berries blossoms will give rise to.

At Hovey’s Pond the hikers sat on ledge in the shade of hemlocks and admired the fields across the water to the north and east.  In silence a beaver swam by.  Geese were heard singing at the east of the pond.  After a while the rested visitors rose and slowly wended their way back south on a different oak-shaded path to King’s nursery where they bought some bushes and got permission for the Middleton Council of Aging/Conservation Commission walkers to park on their next weekly hike.

On Friday twenty-four folks arrived in six cars that King kindly allowed in his few parking spots.  He and neighbor Bob joined the group setting a thirteen-year attendance record of twenty-six hikers who repeated Nancy and the Closeteer’s practice run of a few days before. 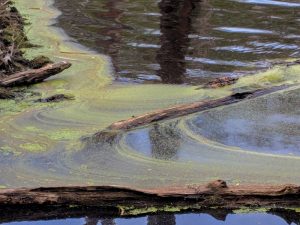 Spring “Duckweed” one of the smallest of flowering plants floating along the edges of a beaver impoundment in Boxford. There are billions in this view. – Judy Schneider photo

Many of the leaves and blossoms so admired then were twice or more as large.  Nursery man King said many of his bushes and young trees had grown half a foot or more in just the last couple days.  Spring has finally come. More visits to Potter’s Farm and other of BTA/BOLT’s hundred miles of trails will too. *

*Visit BTA/BOLT’s site on line for maps and information.  This remarkable organization has a handsome 2017 Trail Guide well worth the $20 cost

** Middleton Stream Team is the source of actual precipitation data for May.