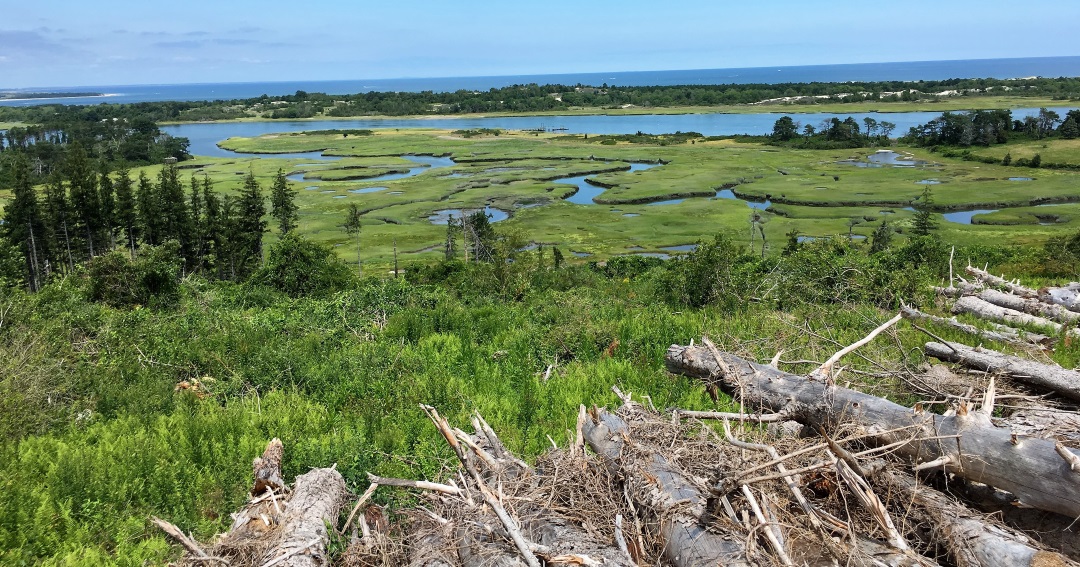 On Saturday, August 12th, eight people, Steam Teamers and a friend, drove to beautiful Essex by the sea and put 4 kayaks and two canoes into the salt marsh crick at the end of Island Road off Route 1A.  The tide was at low ebb.  Clammers, their pickups waiting, had preceded the group.  Kayaker-photographer Elaine Gauthier had done much the same outing in October of last year.

This year, she, our leader, planned to ride the tide out to the back of Crane Beach and there hike one of The Trustees of Reservations’ (TTOR) many lovely trails among the high dunes.  After hiking the tiny fleet returned on the low flood tide to Choate Island for a picnic followed by a climb to the summit of this island hill.  An early rain had departed before the paddlers start.  The sun’s rays softened by interesting clouds were with the group all day.  If you haven’t visited this wondrous area of water, flats, salt marsh, labyrinth of cricks, white sand beaches, dunes and ocean, so near, by all means do so.  For background see the Water Closet that follows about last October’s paddle. MST

Ipswich Bay, in the Gulf of Maine, an extension of the Atlantic Ocean, is encompassed by a twelve mile arc of sandy beaches and bars cut through by the Ipswich and Essex Rivers.  Almost white sands make up the changing channels and disturbing bars at these rivers’ mouths between Plum Island and Crane Beach and between Crane and Wingaersheek Beach, Gloucester.

Behind these beaches, protected by their dunes, are 10,000 acres of soft marshes of accumulated peat and sediment one to thirty feet deep from their edges and only a few thousand years old.  At low tides thousands of accessible acres of exposed mud flats teem with life.  During spring tide highs, after new and full moons, the grass-covered, flat salt marshes are often covered with sea water. “Spring” here is not related to the season.  Spring and neap tides are the monthly highs and lows based on the positions of Sun, Moon, and Earth.  For an hour on some high springs, especially during easterly winds, the marshes behind the barrier beaches appear as vast bays.  As a boy in Salisbury the Closeteer and other called these highs “high-runner-tides.”

Fresh water from the uplands of Newbury, Rowley, Ipswich, Essex, Rockport, Gloucester and beyond joins these estuaries where salt and fresh water mix to form a thin but rich soup that ebbs to enrich the ocean. Easily worked “Merrimack sandy loam” surrounds the tidal waters to the west. The Closeteer was brought up on farms with very little freeboard.  Years ago he attempted a poem about estuaries that were in his blood long before he’d heard the word.

In Ipswich Bay between Salisbury and Gloucester the nourishment in large part comes from the watersheds of the Merrimack, Parker, Rowley, Eagle, Ipswich and Essex Rivers.  Each is fed by many tributaries.  The Merrimack’s bring molecules all the way down from the White Mountains, the headwater streams of the Ipswich from off the roofs and parking lots of Burlington Mall and Wilmington.

On October 16th from the end of Island Street, Essex, twelve tiny vessels joined the mix for a paddle to a high hill arising above the Ipswich-Essex marshes.  From Argilla Road to Crane Beach the paddlers had often admired the spruce covered hill called both Hog and Choate Island.  It had been free range for hogs and other livestock for three hundred years.  Early last century after grazing ceased, spruce trees from Europe were planted.  Now 86 years old they rise up seventy feet shading half the island’s 200 acres.  The paddlers were en route to explore the hill, a glacier-deposited oval drumlin, steep on its southwest and northeast flanks and northwest end. Yearly the gentle southern slope is mown.  The drumlin’s NW-SE axis was the direction of the movement of the estimated half-mile thick ice sheet that melted over 10,000 year ago.  It is completely surrounded by wide salt marsh cricks that visitors must cross.  These barriers had once kept livestock out of mainland gardens. 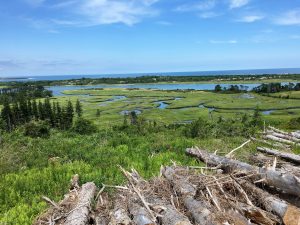 Essex-Ipswich salt marsh and its labyrinth of cricks from the summit of Choate Island. The dunes of Crane Beach are seen between the salt marsh and the ocean. – Elaine Gauthier photo

Some among the visitors not familiar with high-runner-tides were surprised with what greeted them upon arrival at the clammers’ Island Street landing.  That mid-day the marshes were under water.  The mile paddle out to Choate is usually an indirect one via meandering wide cricks.  These and the grassy marshes were hidden by salt water which they paddled over.  With a brisk, westerly fair weather breeze, the adventurers, backs and raised paddles acting as sails, were soon under the steep windward side of high Choate.  Helped by an ebb tide the fleet turned toward the drumlin’s open southeast slope looking for a place to land.

A half hour after getting underway the paddlers’ tiny vessels were tied at the toe of the drumlin to bushes covering an ancient stone wall.  They struggled through and over the thicket and entered a wonderful southeast facing field of 50 acres kept opened by the Trustees.  Twenty years ago the movie The Crucible was partially filmed in a colonial village of facades around the surviving Choate house. 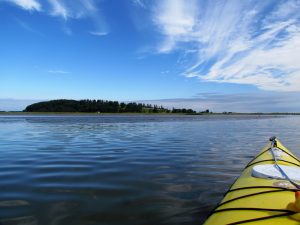 Choate or Hog Island, a glacial drumlin, as seen from the west.. – Elaine Gauthier photo

The handsome house built in the early 1700s and renovated by the movie maker still stands empty in the field marked with stone walls.  Actors Daniel Day-Lewis and Winona Ryder and the ghosts of John Proctor and Abigail Williams, the sinners they played, were not seen or heard.  Maybe on a night visit their spirits might appear to ask you why they aren’t in Salem.  Playwright Arthur Miller certainly didn’t have them there.  Choate was probably chosen because of views from its high field.  God was there watching over his errant children among the coastal marvels of his evolution.  The paddlers, just ordinary moderns not plagued by Puritan notions gone terribly awry, sat in soft grasses picnicking in sunshine half way up the high meadow.  They looked out across Ipswich Bay, fair marshes, beaches and sand bars.  The gods certainly seemed to be with them, but whose gods, the Indians’ or Cotton Mather’s?  It was best that no one spoke of either while enjoying the lovely day as they looked out on the sea where explorers Giovanni da Verrazano, Samuel de Champlain, and John Smith had passed four centuries gone.

** Middleton Stream Team is the source of actual precipitation data for Aug..