THE CURTIS OAK IN MIDDLETON 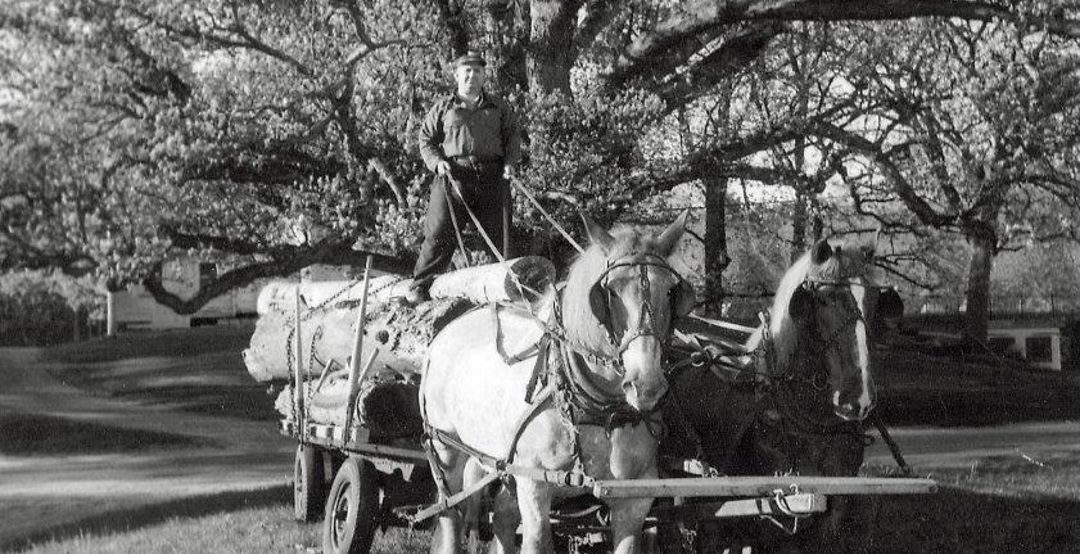 A huge white oak, Quercus alba, in Middleton, one-tenth a mile from the Ipswich River, still stands after four centuries.  For over 16 human generations, surrounded by people who liked to cut down this valuable oak species for ships, barrel staves, and house timbers, owners protected it.  Before that the Naumkeags and the Agawams may have used it as a source of food.  Acorn flour especially from white oaks was an important part of their diet.  The Indians and the Colonists are gone.  The venerable giant, long a town symbol, is now owned by Eric Svenson, Sean DiPietro and their families.  Their lot line, 39 and 41 Peabody Street, passes through or close to the tree.  Both Svenson and DiPietro have expressed an interest in protecting their tree to the Middleton Historical Commission.  Last week the commission had tree climber-arborist Keith Stromski from Byfield and his men remove most of its dead branches.  The Middleton Electric Light Department’s Manager Cloutier has agreed to remove two heavy dead limbs over the street near his lines. 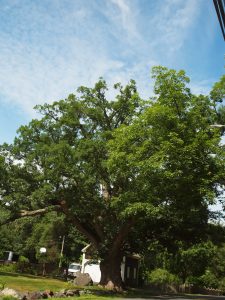 The Curtis Oak, sometimes called “Warren Evans Oak,” on Peabody Street, Middleton. Photo was taken June 2018 after an arborist and his crew pruned most of the dead limbs from it. – Susan Hathaway photo

Stromski gave the Historical Commission a slice from the base of a 16-inch diameter branch that went down during one of the March blizzards when so many trees fell or were damaged.  Its surface was sanded smooth to remove the saw marks thus making its annual rings more clearly seen.  The smooth surface was then wetted with a wax ester called jojoba squeezed from the nuts of a desert plant by that name.  Water or linseed oil could have been used.  The narrow rings, less than a millimeter thick, were then more easily counted using a magnifying glass.  In the 8-inch radius of the 20-foot up-the-tree branch 310 (plus or minus 10) years were counted.  About 1708, not long after the Witch Trials, this branch began as a bud on the main trunk.  We are glad the misguided Puritans at the time didn’t use this as their hanging tree.  One of their victims, John Willard, a good farmer, lived just up road. 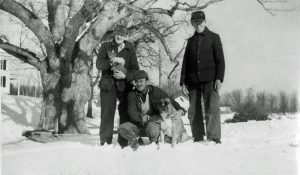 Arthur Curtis on left with cat, Joseph Reed with dog, and Ernest Curtis right circa late 1950s posing under the Curtis Oak. Brothers Arthur and Earnest protected this old white oak gracing their farm on Peabody Street, Middleton. Its age is estimated to be over four centuries. – Courtesy Warren Evans

This venerable old oak was the named The Curtis Oak after the Curtis family, farmers who owned the oak in the late 19th and 20th centuries.  Some later called it “Warrens’ Oak” after Warren Evans, the Curtis brothers’ drover and all round hired hand, who famously gave hayrides with his teams of horses in Middleton last century.  Evans hauled logs to the Curtis water-powered sawmill nearby until the mill was burned by vandals in 1972.  Evans, team, and owners Arthur and Ernest Curtis, were photographed in the shade of the oak.  Friend of the Stream Team Carl Close, who worked for the Curtis brothers as a boy, remembers resting in its shade.

Measured at breast-height, the 80-foot tall oak, is six-feet in diameter.  The leafy crown’s drip edge diameter is about 100 feet.  There may be larger white oaks in New England but we don’t know of any still standing.   A very similar appearing oak in Dighton, Massachusetts, which the Wampanoag leaders were said have met under, died since it was photographed the 1930s.  One of the Middleton commissioners when inspecting the Curtis Oak found a 5-inch diameter hole at the trunk’s base.  He reached inside and found that the trunk beyond a 10 or 12” wall of wood was hollow as far as he could reach.  He concluded that a foot or less thick ring of solid wood making up the trunk supports the great tree.  White oak is very strong.  Two arborists recently consulted say such hollowness is common in old trees.  The living portion outside the cylinder of wood and under the bark is only a few millimeters thick; the tree’s increase in growth is from this active layer of tissue called the cambium just below the bark.

The old Closeteer imagines entering the hole and sitting in the dark.  There he would listen to the tree’s sounds in wind and rain.  Perhaps after it became used to his presence it would tell him stories of what it had seen in a half a millennium of great changes.  It might reveal its Indian name, the one used by the women and children who gathered acorns beneath it.  Stories of children both Indian and then English who climbed and rested in its branches might be told.

The other day when showing Carl Close the slice, the Closeteer learned that the Curtis brothers and then later Warren Evans were very dismissive to those wanting to buy the wood. 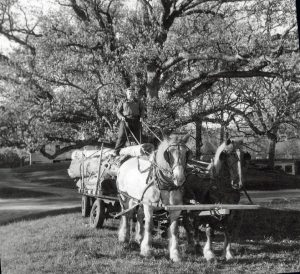 The sometimes-cantankerous Warren saw the tree as his charge and wanted no one especially the town helping him protect it.  Had the Colonist owners given in to the shipbuilders’ agents the branches would have been hewn into ship frames and beams and then hauled by oxen or floated down the Ipswich River on high spring water to shipyards in Ipswich or beyond.  Within a century after the arrival of the English here most of the wood from these large white oaks, so valued by the Indians, was rotting in hulls at sea.  Average life expectancy of even a ship of white oak was less than 20 years.  This despite this oak’s superior resistance to decay.  In time the old oak might tell all its worries to the Closeteer in the dark if somehow contact could be made.  A listener might learn more curled up on one of its great branches.  Certainly, during winds and gentle breezes its branches and leaves would sing.  Ah, if only if trees could talk and we could understand.  The width of the annual growth rings does tell us something about past climates. 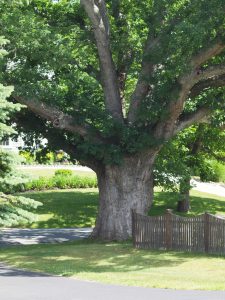 The trunk of this venerable town symbol is about six-feet in diameter at breast height. Curtis Oak’s leafy crown is 100-feet in diameter. The tree is about 80-feet tall. – Susan Hathaway photo

Visit our Curtis Oak and marvel at a living organism four times older than any living human.  One who may have listened in on tribal meetings conducted in Algonquian while the English were still wondering if they shouldn’t follow in the wake of Columbus and explore the “new world.”  English colonists finally did come here in numbers in the 1620s and called the area Salem.  Most of the oaks and large pines near the coasts were soon victims of their axes.  In Easton’s Bible Dictionary Salem means peace, another name for Jerusalem.  No peace for the Indians who were largely gone after the terrible epidemics of the late sixteen teens.  The Curtis Oak survived.  Its leaves and twigs this spring look healthy.

Note:  Here are three favorite books on trees in the Stream Team’s library. Trees by Donald Culrose Peattie which gives us lots of information in lively prose about the natural history and uses of trees.  Trees of the Eastern and Central United States and Canada by William M. Harlow is a pocket sized paperback gem good for identification and notes on uses. We’ve worn out several over the years.  Oak: The Frame of Civilization by William Bryant Logan was reviewed in a Water Closet. It is a wonderfully written history of the importance of oaks in the world in literature and for food and wood.