WHAT A RIVER!  WHAT A TEAM! 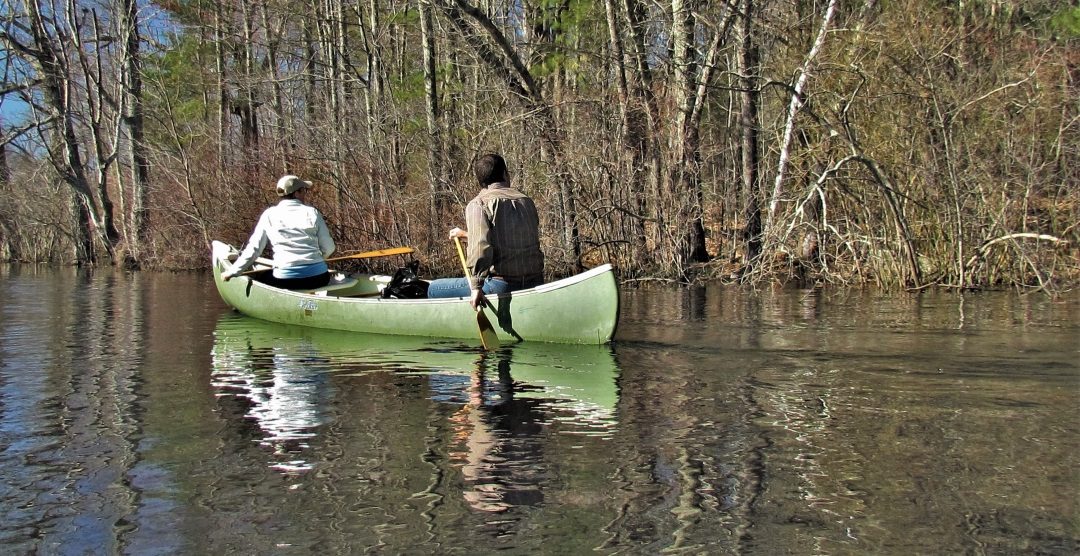 On Sunday April 22, the 56th anniversary of Earth Day, a few Middleton Stream Teamers and friends paddled the Ipswich River for the first time this year.  The ice had been gone a month; the water temperature was up to 50 F.  Last year team members had paddled a couple times in March.  Ten people in two canoes and six kayaks were largely unimpeded on a leisurely 2-hour paddle from the team’s park at Logbridge Road to its Peabody Street Landing.  The fleet stopped midway to rest and snack at Mortalo’s Landing, another team creation done with the help of stone artist Vito Mortalo.  The sun was bright, the river high due to 3.2 inches of rain a few days before. 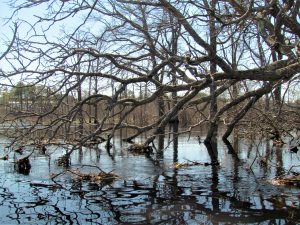 These branches are a few of many and whole trees down across the Ipswich River. Many fell during this March’s three blizzards. – Elaine Gauthier photo

During the rain the river rose 1.8 ft., almost a foot above the river’s mean annual high-water elevation.  Thanks to high water covering the river’s floodplain, the many downed trees encountered, especially red maples, due to March’s three nor’easters, two with heavy snow, were paddled around.

Paddle leader-photographer Elaine Gauthier had us launch at her “church” site.  Sunday mornings she visits the team’s park on Log Bridge road to sit in her pew, meditate and watch the water and the world go by.  One warm morning last summer the old Closeteer found her sleeping mid-morning on her park-bench pew.  The lovely sound of the choir, water over a beaver dam, had lulled her to sleep.  At launch last week there were no prayers.  She had emailed us her morning sermon.  She wisely had us put in downstream just below the high, fast flow over the beaver dam.  A spill into the still cold water might have dampened the spirits for all.  Those disappointed by being denied the thrill will have to go back and shoot over on the dramatic flow alone.  Before getting underway, while waiting for vessel transport logistics to conclude, we talked of past and future trips.  Leon Rubchinuk perennial launch-helper showed us a fine knife blacksmith, Carl Close, friend of the team had made for him from a truck spring.  It was encased in a handsome leather sheath Carl made for it.  Others who knew Carl spoke of his many creations and artistic talents.  An outdoorsman, he too used to paddle with family on the river.  Another talented person with us was Dan Noyes of Newbury who builds fine wooden boats that he sails and rows in places along the coast from Cape Ann to Down East, Maine.  Last year he launched a replica of the Centennial, a dory that famously sailed the Atlantic with its builder in 1876.  In our small-craft fleet, he was bow man with the Closeteer in Fran Masse’s Old Towne canoe.  Fran, who helped start the team in 1997 along with Katharine Brown, John Bacon (team president 1998 to 2013), the late Priscilla Neal and a then younger Closeteer, no longer paddles.  For years Fran led a Patriots Day paddle on the Ipswich River from Middleton to Ipswich.  His mother started the family tradition in the 1930s.  Also, with the first-of-the-year paddlers was team president Sandy Rubchinuk who was fretting, while working day and night in preparation for the team’s annual Earth Day Celebration she has run for seven years.  Will it rain Sunday?   She much needed this break on her beloved river.  Notably absent from the trip was Judy Schneider; Judy, the team’s vice president, superb photographer, board member of the Ipswich River Watershed Association, and long a paddle leader, was with family in Vermont resting from her many team and association chores. 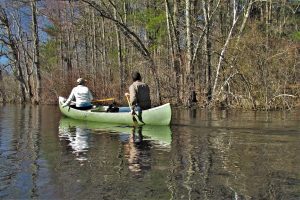 Over the years on paddles from March to late November, we paddlers have become familiar with our river but surprised each season, year and decade to learn of its ever changing nature in fauna, flora and flow.  Many changes are due to beaver dams one crossing the river every mile or so.  Two decades ago invasive purple loosestrife ruled the floodplain; now reed canary grass another invasive has replaced it.  Both are beautiful.  On our trip the canary grass was very noticeable and green but not yet above the high water.  Its blades bent with the flow pointing where to go.  Where they didn’t was in the dark, relatively deep channel.  The purists among us insisted the fleet stay in the channel although there was no necessity to do so in our shallow draft vessels.

All along our route we found painted turtles on fallen logs absorbing the sun in the 60 F air.  We may have pointed out a couple hundred to each other in just four miles, imagine how many thousand weren’t seen.  Like us they were taking advantage of this April’s rare sunlight hours and warmth.  Stream teamers Butch and Elizabeth Cameron, who live just up from the river, called the other day after finding an inch-long turtle just hatched heading toward the river 6000 baby turtle lengths away.  Its mother had nested in a bare place in Cameron’s lawn last summer.  Butch has been reporting turtle hatch sightings to us for two decades.

The turtles are back as we hope is warm weather.  Our Earth Day sojourn was very pleasant.  There were no turnovers and dunkings into the still cold water.  Experienced paddlers had “dry bags” containing sets of dry clothes.  On Fran’s infamous trips we’ve had old timers in their late 80s go in.  When it happens, it happens surprisingly quickly.  Beware. 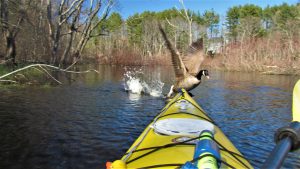 One incident of interest especially to photographer Elaine was when she and kayak got too close to a Canada goose.  The goose rose up and attacked three times.  The third, she, now in battle mode, shooed it away with her paddle.  Geese yearly incubate their eggs in nests built on beaver lodges.  When paddlers get too close they threaten and sometimes attack.  This one met its match.

One stable lady we’ve passed for the past 30 years or more on the lovely stretch of river between Mortalo Landing and Peabody Street Landing is a plaster or concrete Madonna about four-feet high.  She stands a few feet from the water in a fine wooded valley on a small concrete platform she is not fastened to.  This time her toes were in the high water.  We’ve never seen her fallen despite storms and floods.  As the paddlers went by her some spoke of miracles; or might the unknown person who put her there return when she needs help?  In the words of folk singer Iris Dyment we “let the mystery be” as we neared the end of another fine time on our river.

** Middleton Stream Team is the source of actual precipitation data for April.