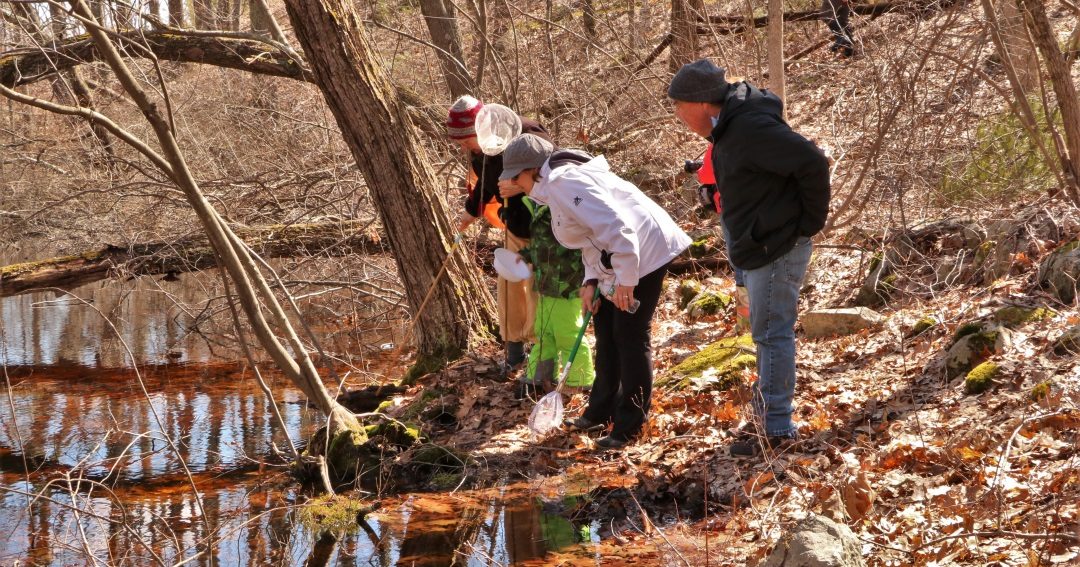 On a cool clear Saturday afternoon about fifty people ages three to eighty-five hiked the ups and downs of glacial sculpted land near fast running Boston Brook.  They walked, some of the smallest being carried now and then, through a mature oak forest thinned out by several fires over the past thirty years.  Here four centuries ago within roughly a day’s walk from all along the coast, Native Americans burned the land in managed fires in spring and fall. 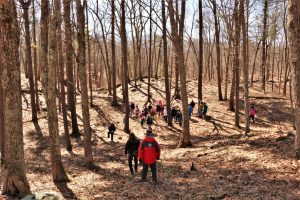 Oak woods north of Boston Brook that has been periodically affected by forest fires which give it this lovely open aspect. The hikers are some of those on the Middleton Stream Team’s vernal pool hike. – Elaine Gauthier photo

The results were open forests of old hardwoods with thick fire-resistant bark.  Nuts and acorns fell from the trees in fall.  In the widespread clearings with lots of light, bushes, berries, and other low soft plants including grasses thrived.  Bears, deer, rabbits, turkeys, and grouse that came to forage did too.  After the English arrived with livestock the scene soon changed.  The English colonists and Americans following the revolution marked off the land and intensely farmed it for almost 300 years.  After the Civil War with ever more factory jobs in growing cities nearby agriculture declined.  By mid-last century it was largely gone.  Without grazing by farmers’ hooved-animals the trees came back. Controlled burns ceased.  Trees and bushes grew.  The Middleton Stream Team spring hikers walked on carpets of leaves under oaks and a few patches of white pines. 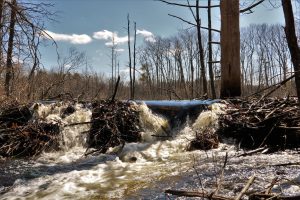 A wet March this year has our brooks full and flowing fast. This sixteen year old beaver dam across Boston Brook visited on April 7 has been raised every couple years until it is now six feet high and 200 feet long. It is just one of many beaver dams keeping precious water in our watersheds longer. – Elaine Gauthier photo

Their quest was not for trees although the Closeteer and hiking friends never tire of them.   Half of the oaks passed had been charred in part by fire.  Many of the trees the fires had killed were still standing, others fallen. Some folks see this forest litter as a mess.  For wildlife the messes are important habitat, cover and a source of insects and fungi for all the creatures that eat them.  Their decaying organic matter slowly forms topsoil.  Roughly a foot has accumulated since the glacier’s ice melted here over eleven millennia ago.  The Closeteer and Stream Team helpers had been checking area pools for two weeks before the team’s “annual vernal pool hike.”  They heard wood frogs in many pools but saw neither them nor their egg masses.  No yellow spotted salamanders, their spermatophores or egg clumps, usually so common this time of year, were found in the pools.  In a couple warmer visits an American toad call and those of a few peeper frogs were heard near the pools.  It has been a strange spring with only a few warm days and many freezing nights.  Two nights before the hike the temperature got down to 22 F.   Most years in early April, actively reproducing wood frogs and salamanders are doing what we voyeurs expect.  We wondered about the effects of the long thaw in February when the temperature on two days had gotten close to 70 F.  We know that warmth fooled many buds to grow and even some peepers to peep.  The deeply frozen soil from late December-January’s record cold spell was soft by the end of February.  The past winter and early spring has been very different from those usually experienced. 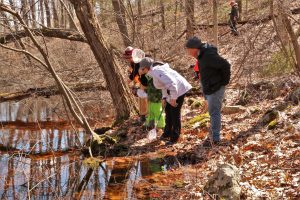 Three folks of forty or so looking for vernal pool animals. Many fairy-shrimp were found but no salamander or frogs eggs as anticipated in early April. Netters catch, examine in bowls, and release. This woodland pool is one of hundreds in the Tri-Town area. – Elaine Gauthier photo

During the hike we thought those record cold and warm months were past.  Our many vernal pools were full to the brim with water temperatures over 40 F on the day of the hike.  Where were the egg masses?  The 20 or so children not knowing what to expect swept their nets in a large vernal pool visited and, on many passes, got lovely fairy shrimp which they put into white plastic containers of water and watched the transparent half-inch long beauties swim.  Under a warm sun in fine woods excitement spread among kids watching the shrimp and a few isopods and parents watching kids.  The bottoms of our water bodies are still paved with last year’s oak leaves still intact. The water was clear and inviting to us all.  You don’t have to attend the stream steam’s annual hikes to see the actie and varied life in ponds.

There are over a hundred vernal pools in Middleton’s fourteen square miles alone and perhaps a thousand in Essex County.  We urge families go forth and find those near their houses.  If you want guidance contact the Middleton Stream Team.  A favorite for book for all ages is A Field Guide to the Animals of Vernal Pools by local naturalists Leo Kenney and Matthew Burne.

** Middleton Stream Team is the source of actual precipitation data for April.