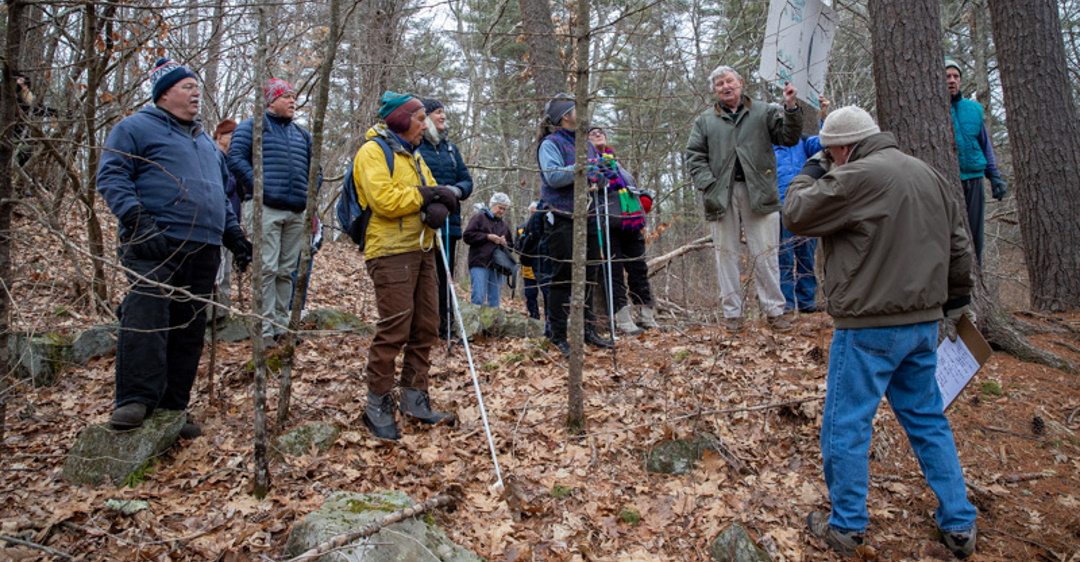 The annual winter hike of the Middleton Stream Team was planned this year to give people an opportunity to see the, usually below water, world of beavers. The dam on Emerson Brook, creating Prichard’s Pond, recently breached in one area, causing a dramatic drop in water levels. The hikers on this overcast, but mild winter day, were amazed. It is very rare to see the many tunnels, runways, and entrances to lodges that beavers use to stay hidden from all and safe from predators. It seems most of the beavers may have moved up the brook to a large impoundment northwest of the pond. On the pond, we found several lodges with the entrance hole totally exposed due to the very low water; this would be a dangerous home for a beaver. But not all of them have given up and moved! We discovered several large trees recently chewed. These large rodents usually only eat the cambium layer of nutrient rich pulp just under the bark, although they will also sample small branches. They prepare for winter by dragging many branches and stacking them in the pond just outside their lodge. They can stay inside and just eat from their “pantry”, right outside their door. With all the work areas of the beavers in full sight on this hike, it was easy to see how they live.
It isn’t only beavers still living in Prichards Pond, the otters are also very active. We found many scat piles and, upon examination, the fishing seems to be very productive. With the fish now contained in a smaller pond, making them easier to catch, and from the size of some of the scat piles full of fish scales, they seem to be feasting! There were discoveries of all kinds throughout the afternoon. We found owl pellets and they contained bones the size of a small rabbit. We found signs of early man, as early as the thirties and forties! Although the ice was not safe to walk on, we could still make out the tracks of a coyote crossing the pond during the colder days.
The final stretch of the hike was exciting in a different way. The pre-hike planners, led by Pike Messenger, had run a hand rope through some large secure trees, so that the hikers could safely walk across the top of the dam. We got a close up look at the beautiful ice formations over the rushing water. We also got to see the old sluice way control, rusted and frozen shut, but the wheel and mechanisms still clearly visible from where we stood on top the dam.
We had started the hike by heading up Boston Brook for a bit of history of the 17th century water powered mill that had once been there. The old man-made dam has crumbled but the beavers have impounded the area above where the dam and water powered wheel would have been. We then followed Boston Brook back to Mundy Bridge and started around Prichards pond, completing our journey by walking across the dam. History, signs of wildlife, friendly conversation, and sharing our discoveries; this is what makes a Middleton Stream team hike so much fun.


Warning: count(): Parameter must be an array or an object that implements Countable in /home/middle45/public_html/wp-content/plugins/slickquiz/php/slickquiz-front.php on line 59