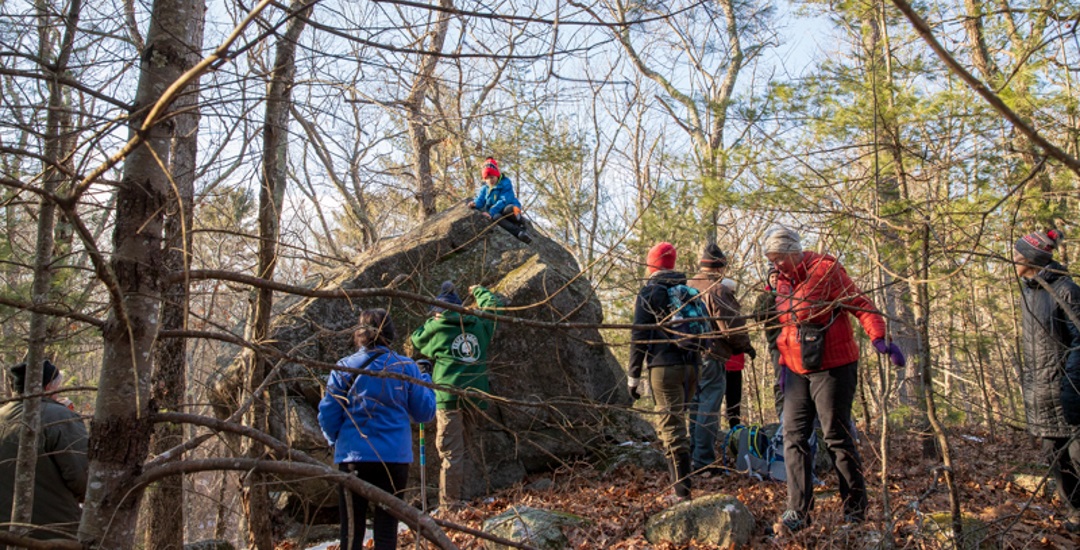 The winter hike, sponsored jointly by the Middleton Stream Team and IRWA, departed into the forest on a cold but sunny Saturday afternoon from Munday Bridge, a beautiful area off North Liberty Street in Middleton. After crossing a bridge over the rushing waters of Boston Brook we traveled upstream to view a beaver dam and the impoundment that is now a refuge for waterfowl and nesting birds. Pike talked of the early history of these lands, originally the Agawam people farmed them followed by Colonial farmers moving in. They began building stone walls from the many stones left behind by the glaciers and these walls traverse much of these lands. Along with history, the hikers observed wildlife tracks, markings, and even a mystery that has not been positively explained yet! The varied terrain offered excitement for all ages. From patches of ice, areas of running water, some unfrozen shallow bog, to snow; the stream team members assisted all whenever needed. The huge glacial erratic, propped up by a smaller rock, was a place to crawl through for those that dared. For one youngster, Eli Hawkins, a boost from his dad and he was “on top of the world”. A budding young scientist, Lily Hawkins, found fairy shrimp in a section of warmer bog and from past hikes where we inserted a thermometer down into a skunk cabbage, we knew the cabbage we found contributed to that warmth. We walked on Greenbelt land until we reached “Ann’s Land” and a wide easy trail as we completed our loop back to North Liberty Street. The sun was dropping but the smiling faces on the hikers was proof that hours spent outdoors in Nature are truly a gift!


Warning: count(): Parameter must be an array or an object that implements Countable in /home/flintl6/middletonstreamteam.org/wp-content/plugins/slickquiz/php/slickquiz-front.php on line 59