Katie Bernard was awarded the Middleton Stream Team Environmental Award in a small ceremony at the edge of the Ipswich River last week. The one thousand dollar award goes to a Middleton applicant that demonstrates an active and continued interest in environmental stewardship. The student must be in pursuit of a degree in a post-secondary educational institution. Her scholarship award has been presented in the memory of Edward Roman, an invaluable member of the Middleton Team from Topsfield. 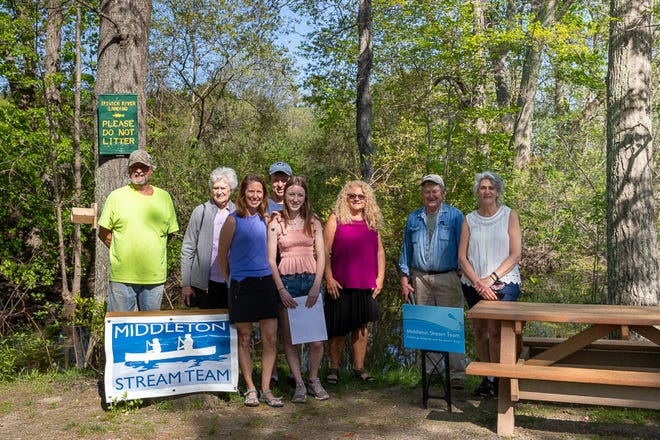 Katie became known to the stream team members when she created a “letterboxing” (outdoor nature inspired treasure hunt) activity in pursuit of her Girl Scout Silver Award. She became a member of the Masconomet Environmental Club, the Green Team which initiated composting at the school, the National Honor Society, Student Council, ski team captain, and the recipient of the Rachel Carson Healthy Planet Book Award. Katie was trained as a river warden by IRWA and also serves on their student advisory board. She and a friend helped restore Fish Brook to health, a tributary to the endangered Ipswich River. After much work, they created a documentary film, “Restoring Fish Brook” that received much praise at several showings and can also be viewed online.

Katie has been very involved in Clima 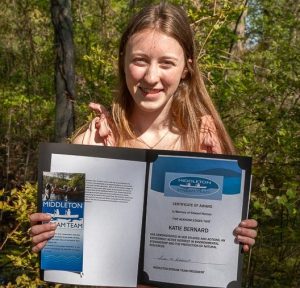 te Cafe, designing a climate café website after Covid prevented meetings in person. High school and college students, as well as advisors, discuss relevant environmental concerns and solutions during these Climate Café sessions. She participated in the Dartmouth College and National Science Foundation-funded polar science program, Joint Science Educational Project (JSEP). She was one of 35 students selected nationally to participate in a fully funded online research experience with Dartmouth faculty and graduate students as well as high schoolers from Greenland and Denmark. She also worked as a paid intern at Lariat Biosciences doing lab research. In her spare time Katie hiked all 48 4,000 ft. mountains in New Hampshire. Katie will be attending Colby College in Maine, known for their excellent environmental science programs.

Three students from Essex North Shore Agricultural and Technical School were also presented awards. Angelina Bucco of Danvers was presented with a one-thousand dollar award. She is a member of the Mass Audubon Teen Conservation Club at the Ipswich River Wildlife Sanctuary in Topsfield, collecting environmental data and doing conservation work. She has ArcGIS Water Quality testing skills. Angelina maintained a GPA average of 4.6 and her area of study at Essex Tech was environmental technology. She will be attending the University of Maine, Orono in the fall, studying Earth and Climate Science.

Two special awards of five hundred dollars each were made to Emma Gaffey and Matt Marshall. Matt’s award was made in the memory of Frank Masse, a great outdoorsman and original member of the Middleton Stream Team. As Frank’s dad was a game warden, this award will help Matt pursue his dream of being an environmental police game warden after attending University of Maine, Machias, in the Conservation Law and Outdoor Management program this fall. Matt is from the town of Reading and was in the Natural Resources Program at Essex Tech. Emma Gaffey’s award was made in the memory of Gaylen and Glenice Kelly, both educators and members of the Middleton Stream Team. Emma is from Saugus and while at Essex Tech completed Hydrology, Wildlife, GIS courses, and Water Quality Testing as part of Natural Resources Management studies. She also interned at the Ipswich River Wildlife Sanctuary in Topsfield doing trail management, maple sugaring, and data collection with GIS and transects. She will be attending University of Maine with a major in Earth and Climate Science.