Note from Our President, Sandy Rubchinuk

On a recent expedition into the North Maine Woods logging country to camp, hunt, and photograph wildlife for ten days, I brought along two gallon containers of store bought bottled water. I was looking forward to filling them with pure spring water from the wilderness. 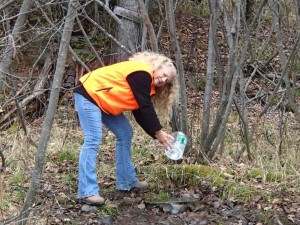 Although our pop up camper holds water and in warmer months we fill it from our home well, northern Maine in November usually brings freezing weather, causing the tank and lines to freeze and crack. As I don’t usually peruse the bottled water aisles, I was amazed that almost an entire aisle of a large grocery store can be filled with water for purchase. I don’t consider myself cheap, as I will splurge on a carbonated seltzer water, I am frugal and enjoy the fact that my well provides me with good water for free! I also hoped the two springs we knew of that had been tapped with a hose safely ensconced under a layer of rocks would be running in the wilderness. These springs have been used by lumbermen for years and before that by the Penobscot. Only one was still running cold and clear!

So many myths abound when it comes to bottled water. So many battles are fought over water. So many people in this world do not have access to clean safe drinking water.  Each year in Middleton more lines are run to bring safe drinking water into people’s homes. It doesn’t come down my street yet and if more houses are the prerequisite, I would rather not have a water line! Many years my well became iffy when the huge lawns on neighboring streets are watered night and day, with water often running down the sidewalks. You see, with a well, these folk can waste as much water as they want, without regard to what is left in the watershed we share. We sunk our pump as low as it could go in the well, my kids moved to Maine, and we water our gardens off a 5,000 gallon rain water collection tank collecting from the garage roof. We also have rain barrels under two house gutters just for watering in the front yard. Of course you can’t drink rain barrel water so I return to the myths of bottled water.

I begin with the myth of taste. Although people think bottled water tastes better, it is usually the ads and packaging that make it seem to taste better. Actually in many tests, 75% of test subjects picked tap water as tasting better. I would be in the 25 %! I grew up with town water and thought it was just fine and have good teeth too! However, after moving across town with my children to the Rubchinuk farm and a shallow well I loved my water NOT having any taste. When I visited mom over on Park Ave. I lamented that the water tasted different, the sanitation process leaving a taste in my opinion. On the East street side of town, the Rubchinuk farm had one well, five families with lots of children, many homeless people, over 100 hogs, five horses and a few cows, all drinking from one well and it was good water! Not wanting to enter the current fluoride debate at this time, I will state that my son, spending the first two years on town water in our Howe’s Station apartment, never had any cavities. My daughter, born on the farm and not having fluoridated water, had many cavities from a young age. They both had good dental care from dentists. Anecdotal, not scientific, but my experience!

The myths are that bottled water is better for your health, safer, reduces waste, and more convenient. The facts prove otherwise. Plastic bottles release chemicals, the longer the water sits the higher concentrations of chemicals. Although you may use your water up quickly, it could sit on shelves for a long time before you buy it and stored under a variety of conditions. One chemical, antimony, which has higher concentrations the longer it sits in a bottle, is known to cause nausea, depression, and dizziness even in small doses. In recent tests, 1/5 of bottled water tested positive for industrial chemicals and plastic manufacturing chemicals. Unless the company decides to conduct more than the required FDA regulatory tests (less than required by EPA for tap water) the water is not tested for cryptosporidium, the chlorine resistant protozoan that made 400,000 Milwaukee residents sick in 1993. In 1999 the National Resources Defense Council found 18 of the 130 bottled water brands contained “more bacteria than allowed under the microbiological purity guidelines.”  Public water is tested for chemical contamination four times as often as bottled water. The FDA doesn’t even require bottled water companies to name their source. Dasani was recently exposed as being nothing more than purified tap water. Nestle is in the middle of several water battles. The beautiful glacial pictures and advertisements for flowing springs are so much more convincing than a bottle being filled from a faucet!

If the argument for convenience seems plausible, please also take in the fact that this water is shipped, stored, carried home and stored again. It requires 47 million gallons of oil a year to produce plastic water bottles, and takes 1000 years for a bottle to degrade in a landfill. When burned, these bottles release dioxins and the fact is that 4 billion plastic water bottles end up in the US waste system. For us stream teamers that often clean up roadside litter, plastic water bottles make up the majority of litter. Even if you recycle, they are not always used, and end up in the vast eddies of plastic waste spinning in our oceans. This risks marine life, birds and fish and when you view the damage caused it will make you sick. If by convenience you also include “cheap”, be aware that bottled water costs 240 to over 10,000 times more per gallon than tap water.

My mind returns to the wilderness. Maine had much more rain than we had here in Massachusetts and water is everywhere! Lover of these rodents, Pike, would be overjoyed by the frantic beaver activity, as my husband lamented some roads being washed away due to their “industriousness”! After hundreds of miles of dirt roads, off the grid for cell service, internet, gas stations, and seeing few other people, we came to one of the two “developed” springs. It was not running! Traveling more lumber roads within the 3 million acre working forest we came to the second spring, marked with a worn old board sign. It was flowing fast and cold from the end of a hose about 20 feet from the road. The hose is stuck about 40 feet uphill into the spring and protected under gravel and rocks. After filling our jugs, Leon always asks if I remembered to turn the faucet off.

Warning: count(): Parameter must be an array or an object that implements Countable in /home/flintl6/middletonstreamteam.org/wp-content/plugins/slickquiz/php/slickquiz-front.php on line 59